I’ve enjoyed lifting weights since college. Heading to the gym was a good escape from the rigors of calculus and engineering classes.

However I haven’t been a member of a brick and mortar gym in ages. This summer we joined the YMCA. With my husband’s travel schedule I couldn’t consistently go on solo walks like I enjoy after spending all day with the kids. I could lift weights at home and still do sometimes, but workouts get interrupted easily with four kids. So in a fit of frustration with my oldest son, I signed us up. I rationalized the expense, figuring the amount I would have to pay in childcare could easily be quadrupled if I paid someone at my home. Plus coordinating the childcare seemed like a headache.

So back in June, me and the kids started going. I made it one solid week of going and then the kids got sick. I missed the next week and was grumbling and pissed off that I had wasted funds and I wasn’t utilizing the membership. Kids got better and I started back, lifting what I felt like and taking yoga or other fitness classes.

I was glad the kids were enjoying the childcare and I was getting some much needed time to tend to my own fitness goals. I’ve always wanted to be able to do a pull-up. And I enjoy watching people do Olympic lifts. I felt like I needed a lifting plan and while I know my talented husband could have probably drafted me one, I did my own searching.

A friend suggested some apps, one called Charley Mike. I loaded it on my phone and read through the workouts. The lady kind of freaked me out. I wasn’t at all to that level of lifting so I kept on searching. On Amazon I found a few books but one was called “The New Rules of Lifting for Women.” I liked the reviews so I decided to get it. I ordered it at the beginning of August. I read through the book and liked the lifting plan. Didn’t care for the nutrition plan but decided I would follow the lifting and do my best to eat enough protein and vegetables.

My first workout using NROL for women, my friend Amy joined me. It was quite ridiculous watching us…well me do those first deadlifts. Amy was able to join me on a few workouts until  mid-August hit and she started back to school.

I’ve managed to get three workouts in nearly every week, only missing the day after Thanksgiving and one day in New York City. I’m almost done with stage five of the book, the whole plan has seven stages that go for about six months.

My lifting ability has increased, I’ve discovered some big imbalances in my body, and I gaining a lot more strength. What’s been fun is I took my measurements for making clothes at the beginning of all of this and two more times since. It has helped me see my body reshape itself in certain areas. My glutes/hamstrings tend to be a weaker part of my body. I started having issues in my right hip only about a month into lifting. Lunges were so hard for me to do on my right side. With some slow strength training, chiropractic care and only using my own body weight, I can now do lunges without hurting.

About three weeks ago, I started to feel like my clothes were fitting differently, but not because I’ve dropped any weight. In fact, my weight has stayed right around the same these past few months. However, as I’ve done more squats, lunges and deadlifts, my legs have gotten a little bit bigger. I didn’t realize by how much until I compared measurements. Check out the image below to see the number differences.

This post is partially just for my recording what I’ve been doing, and partially because my friend Vanessa has been a huge inspiration for me. I’ve always thought that well defined arms on a man or a woman is extremely attractive. Vanessa has been working her butt off at the gym for a few years now, and I’ve had arm envy for the past year because of her. I have a few other friends that are climbers, Adele and Susan and they too impress me with their agility and strength. By them sharing themselves through social media, they all have been encouragers for me, even though we don’t live in the same city. So here are a few photos to show just a bit of progress. I know that it may take me years to get to the level of strength I want, but each week there are slight gains. So thanks to my friends that have encouraged me. 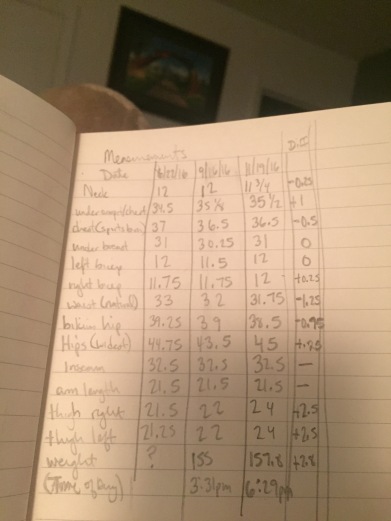 Measurements over the past 5.5 months.

Me trying to make it look like I have some muscles.:) They’re there…

This entry was posted in Family, Women, Work Out.